There are many studies on the history before the Ryukyu Kingdom was born in 1429, but the history of the Ryukyu Kingdom, which had a 450-year history as an independent country until it became Okinawa in 1879, unraveled the uniqueness of Okinawa. Through the trade relationships with China, Japan, Korea, and other Southeast Asian countries during the Ryukyu Kingdom era, Okinawa welcomed cultural exchanges, learned from them, maturing together. Those are the backbone that made Okinawa's culture unique and declared a UNESCO World Heritage Site. 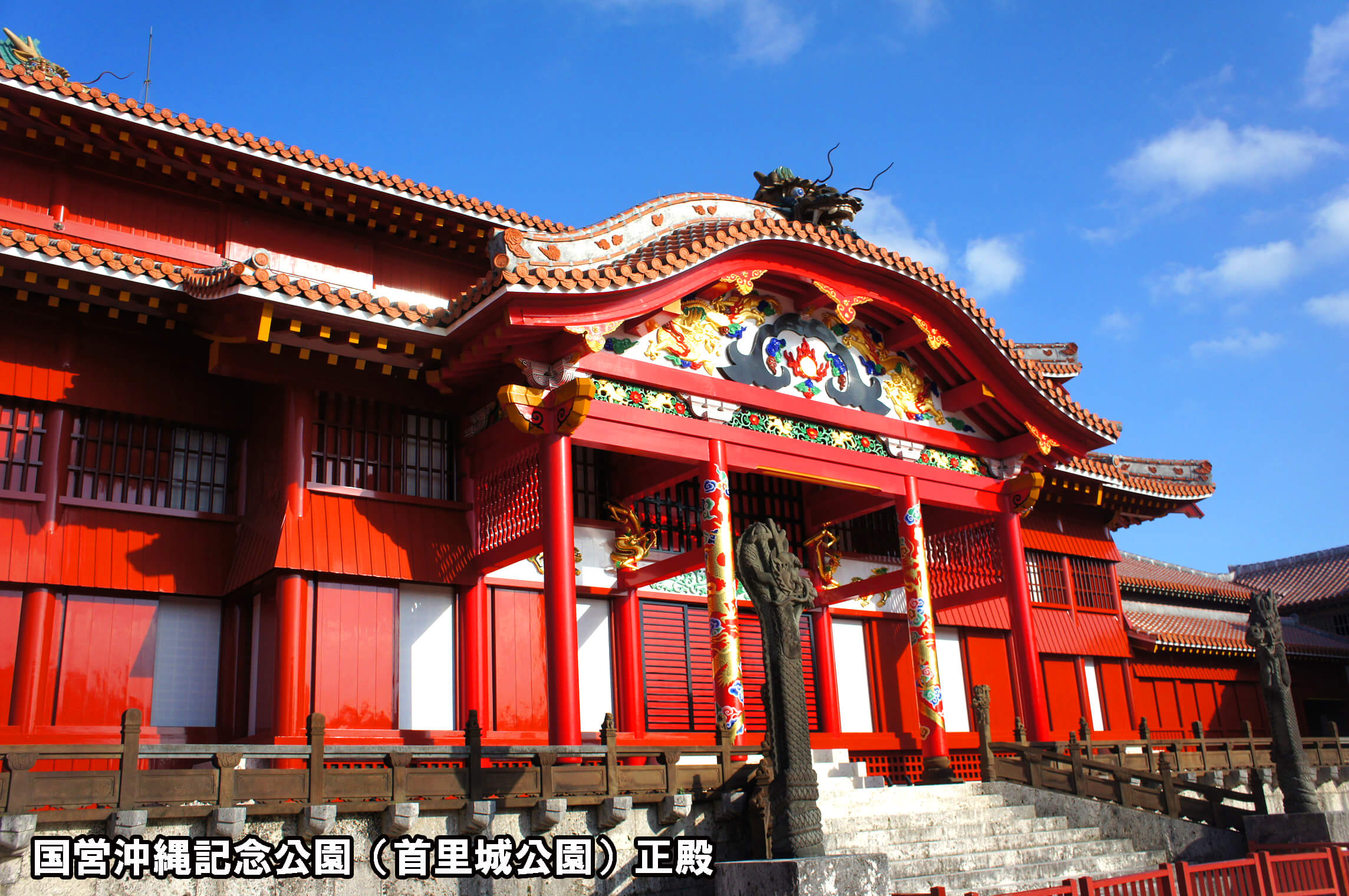 The Ryukyu Kingdom prospered mainly around the southern part of Okinawa Main Island for 450 years from 1429 to 1879. The “Gusuku Sites and Related Properties of the Kingdom of Ryukyu” composed of the historical sites was registered as a UNESCO World Heritage Site in 2000. Shō Hashi united the leaders from each region and became the first king of the Ryukyu Kingdom in 1429. Shurijo Castle (caution: before dawn on October 31, 2019, at least seven buildings, including the Seiden, an Okinawa landmark, burned down due to a fire) was the center of the kingdom, and as a maritime nation, the Ryukyu Kingdom deepend cultural exchanges and relationships with China, Japan, and other Asian countries. It is said that the port of Naha at that time was full of imported goods and foreigners and flourished as a base for East Asian trade. That was a time called the Great Trade Era and a Portuguese Tome Pires mentioned Ryukyu as “Lequio” in his book “The Suma Oriental,” and described how it rejoiced its prosperity.

In 1609, shortly after Japan started the Edo Shogunate, the Ryukyu Kingdom was invaded by the Satsuma Domain (present-day Kagoshima Prefecture) and the influence of Japan became stronger since then and it made Okinawa even foster its distinctive culture. Furthermore, when the Edo Shogunate was over and Japan opened the country and entered the Meiji era, the 450-year-old kingdom of Ryukyu also disappeared and became Okinawa Prefecture.

As Japan moved quickly to become a modern nation by fighting with the Western nations, Okinawa was involved and was tossed by international politics. In March 1945, when the Pacific War was about to end, the U.S. troops landed on Okinawa. A fierce ground battle, called the “Iron Storm,” took place, and the number of people who died reached about 240,000, including about 100,000 Okinawans. After the war, Okinawa was under the U.S. administration for 27 years and during that time, the military base was built, expanded, and still exists even Okinawa returned to Japan on May 15th, 1972.

Okinawa has such a historical background, and the champuru (means “mixed” in Okinawan language) culture embracing various races and cultural diversity has been nurtured. The “Gusuku Sites and Related Properties of the Kingdom of Ryukyu” is the icon of the culture of the Ryukyu and the UNESCO made a statement below:

Criterion (ii): For several centuries the Ryukyu islands served as a centre of economic and cultural interchange between south-east Asia, China, Korea, and Japan, and this is vividly demonstrated by the surviving monuments.

Criterion (iii): The culture of the Ryukyuan Kingdom evolved and flourished in a special political and economic environment, which gave its culture a unique quality.

Criterion (vi): The Ryukyu sacred sites constitute an exceptional example of an indigenous form of nature and ancestor worship that has survived intact into the modern age alongside other established world religions. 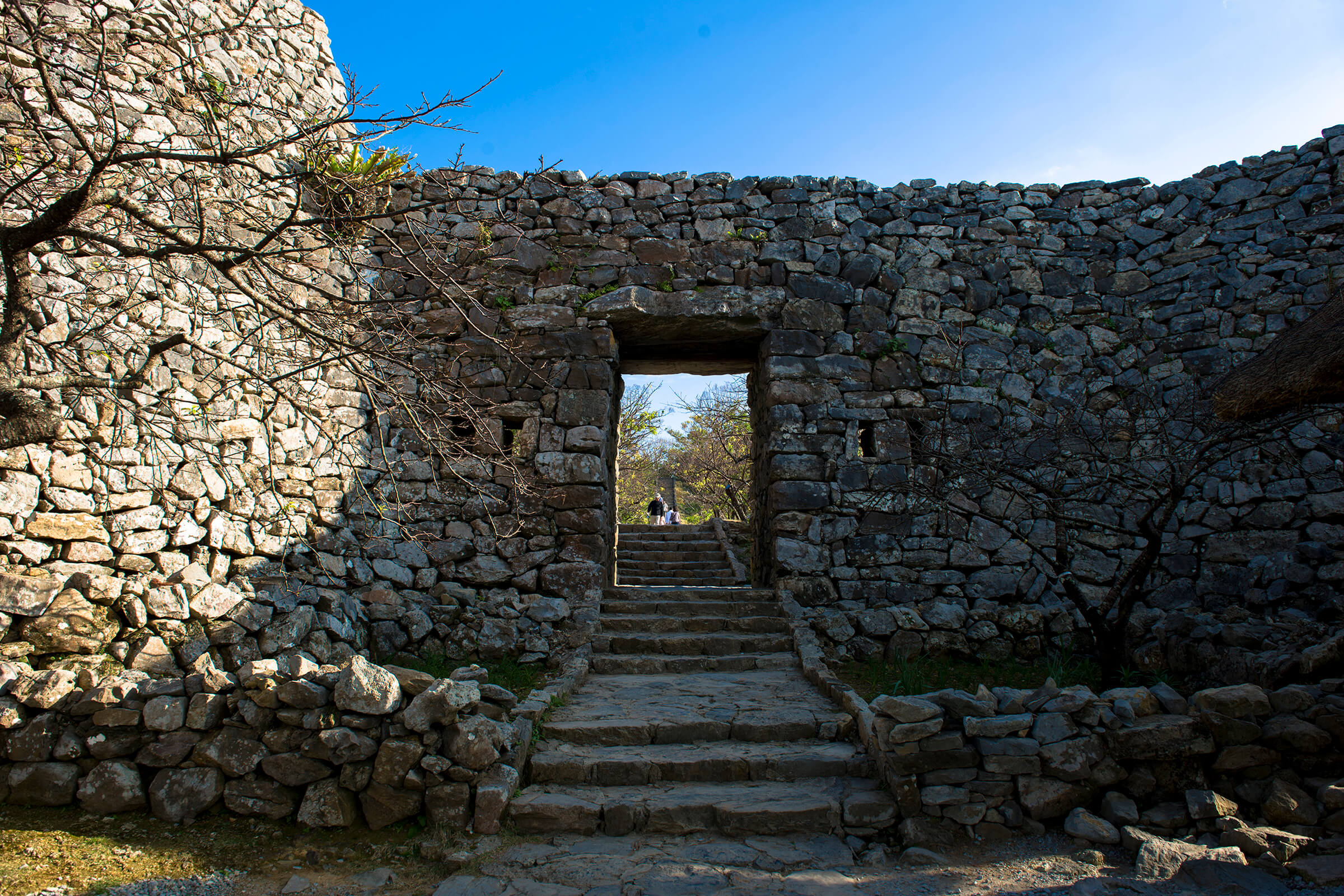 There was a civil war period called “Sanzan Period,” and the country was divided into 3 nations – Hokuzan, Chuzan, and Nanzan. Nakijin Castle was a castle of the Hokuzan King, and attacked by the Chuzan in 1416. After the Ryukyu Kingdom was established in 1429, it became a residence of the guard officers who were sent by the Ryukyuan Government. From the castle ruins, dim outlines of Izena and Iheya Islands, said to be origins of the Ryukyu Kingdom, and Yoron Island can be seen on a sunny day. The castle features 1,500-meters of undulating walls built on a gentle slope that give the structure a beautiful and graceful appearance, reminiscent of the Great Wall of China. 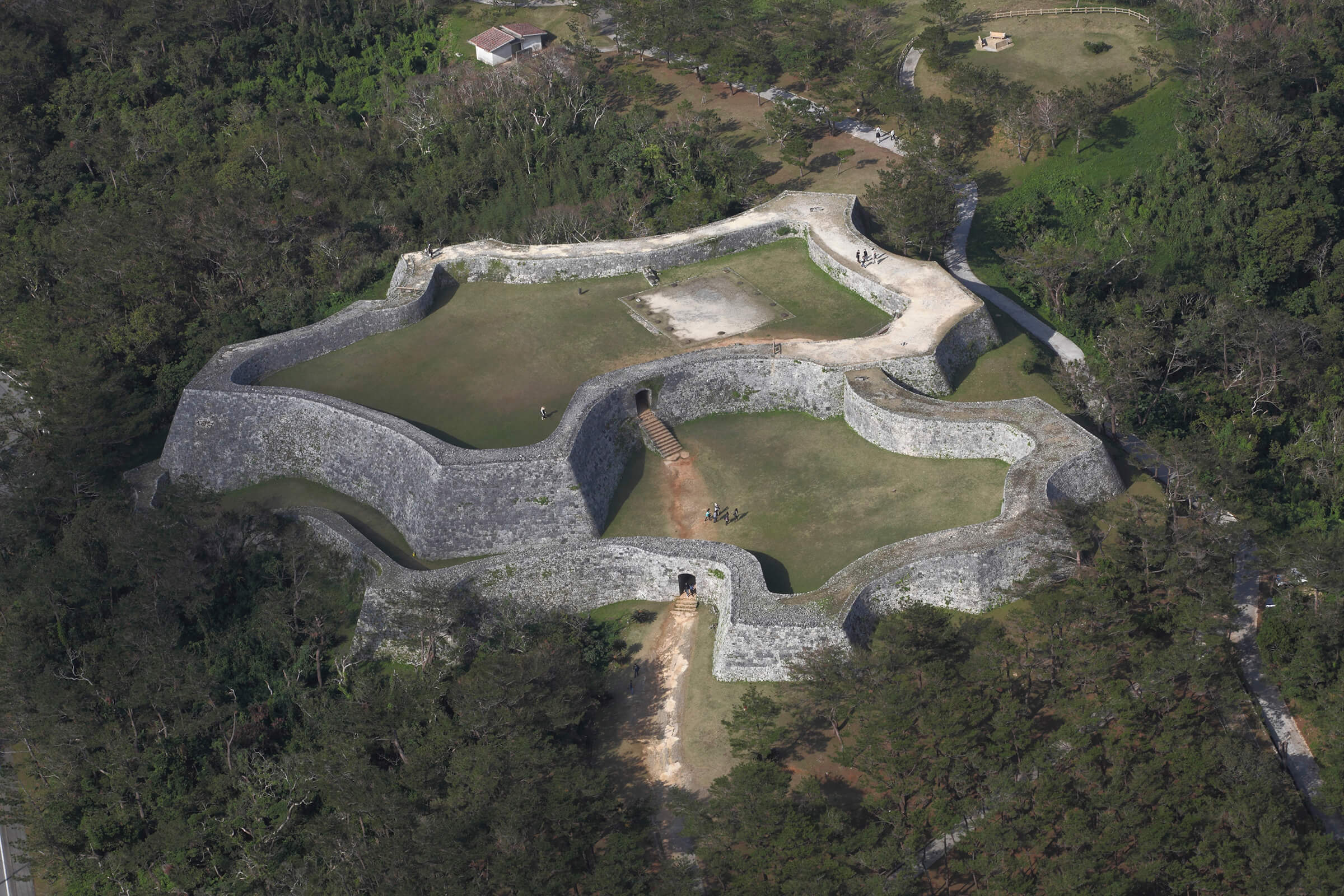 A castle built by Gosamaru, a great commander who played an important role in the 1420s, during the Sanzan Period (civil war era), and worked hard to secure the Ryukyu Kingdom after its unification. As a fortified castle, it contributed to the stability of the Kingdom. The castle itself is small, but its stone walls and beautifully detailed gates are said to be among the finest of all castles in Okinawa, important historical site which indicates the sophisticated techniques of stone structures. 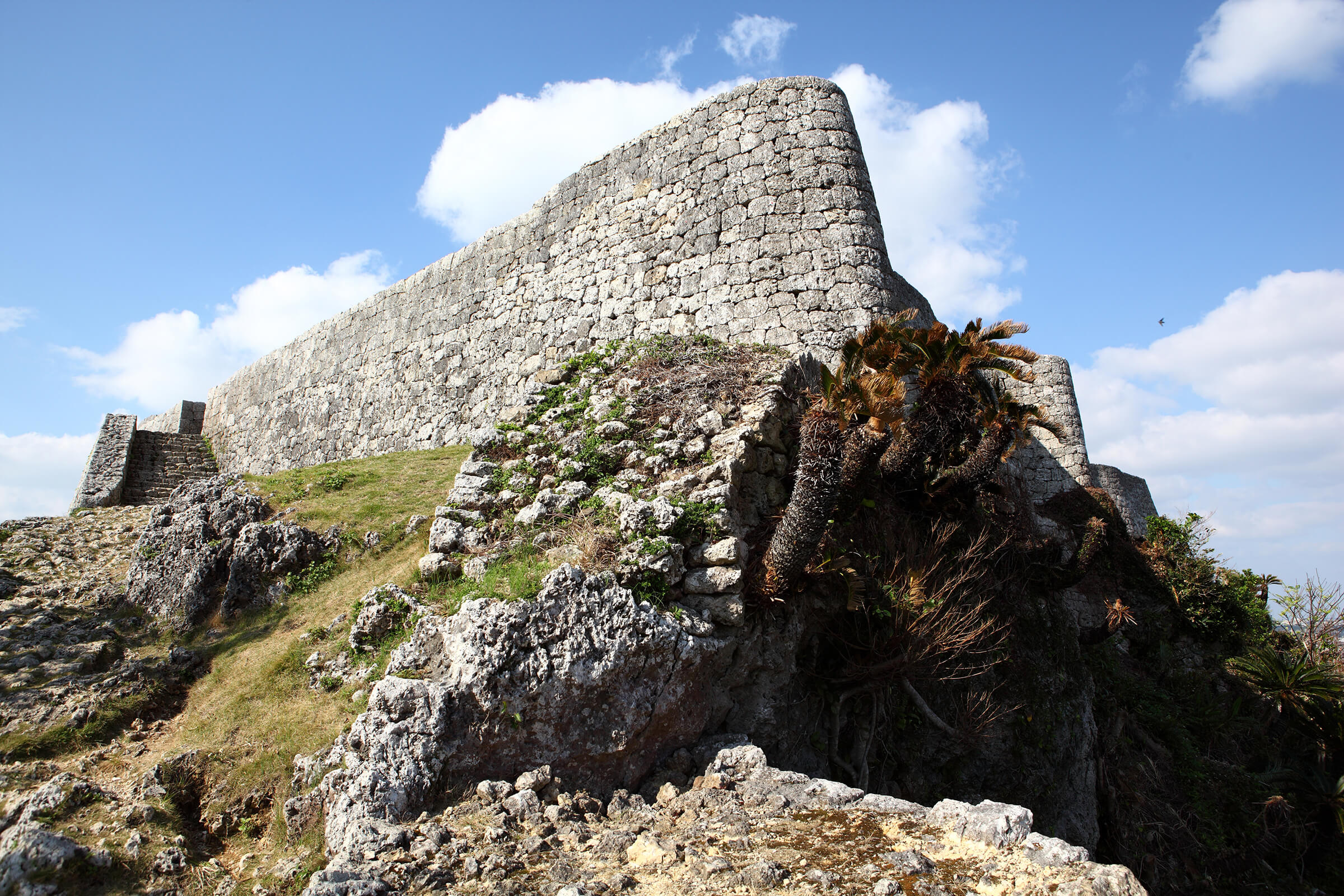 In the process of stabilization of the Ryukyu kingdom, Amawari, the owner of the castle, resisted the king until the end. In 1458, Amawari attacked and killed Gosamaru, the king’s ally, in Nakagusuku-jo Castle and even marched into Shurijo Castle for the throne but was defeated and executed. In 2016, for the first time in Japan, the archaeologists have unearthed ancient Roman coins at the ruins. It is believed that people at that time got the coins through the trade with China or other Southeast Countries. Even the Katsuren Castle did not have a direct link with the Roman Empire, the discovery confirmed how the Ryukyu Kingdom had trade relations with the rest of Asian countries and further region. 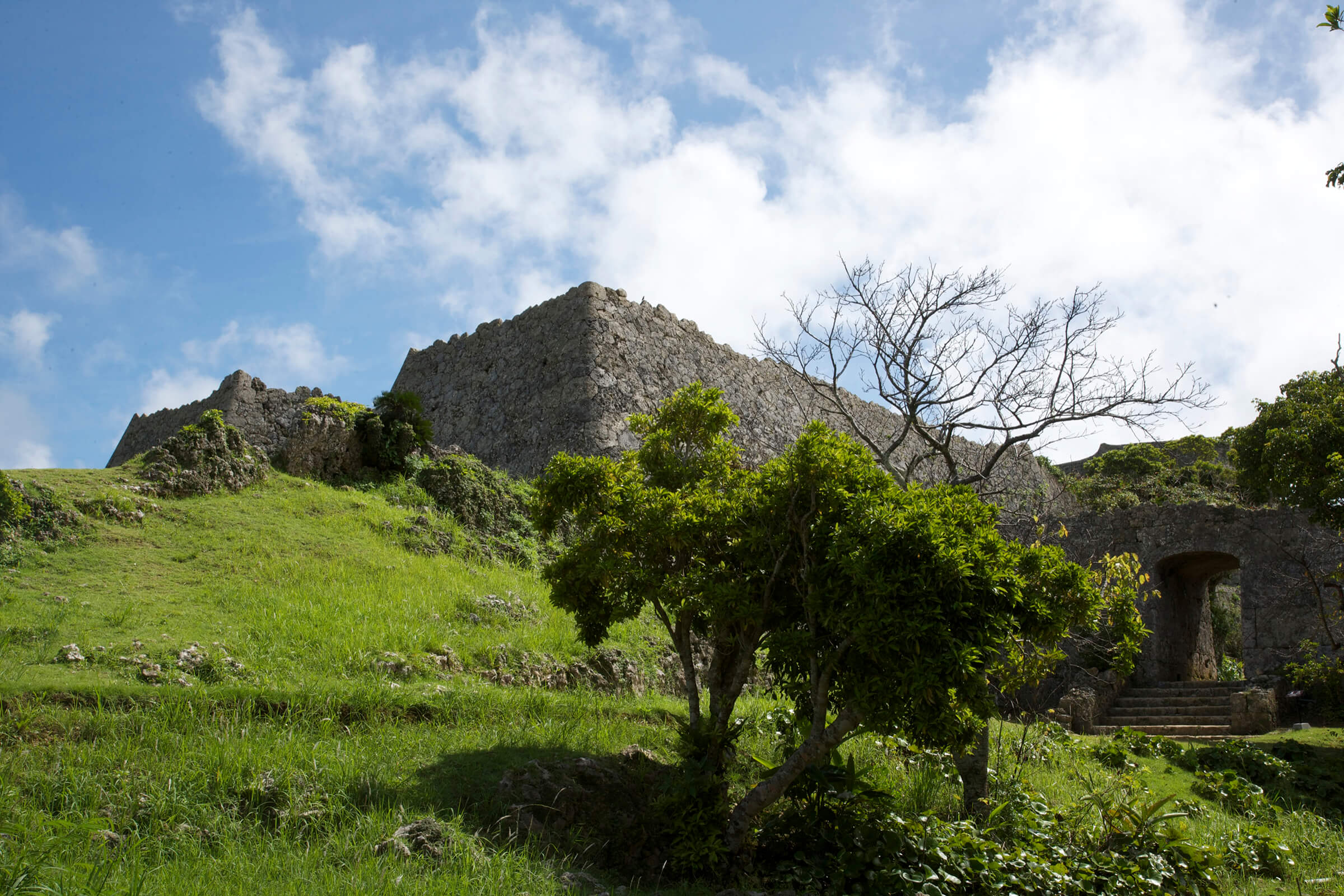 Nakagusuku Castle was built to defend against attacks from Amawari of Katsuren Castle, and Gozamaru, the owner of Zakimi Castle, relocated at the order of the King, played an important role in the process of stabilizing the Ryukyu Kingdom. These were built with advanced masonry techniques including the Aikata-zumi technique to interlock and pile up rocks, and there is also an arch-shaped main gate. The expedition deployed by Commodore Perry, which came to Japan at the end of Edo period, was amazed by its construction. 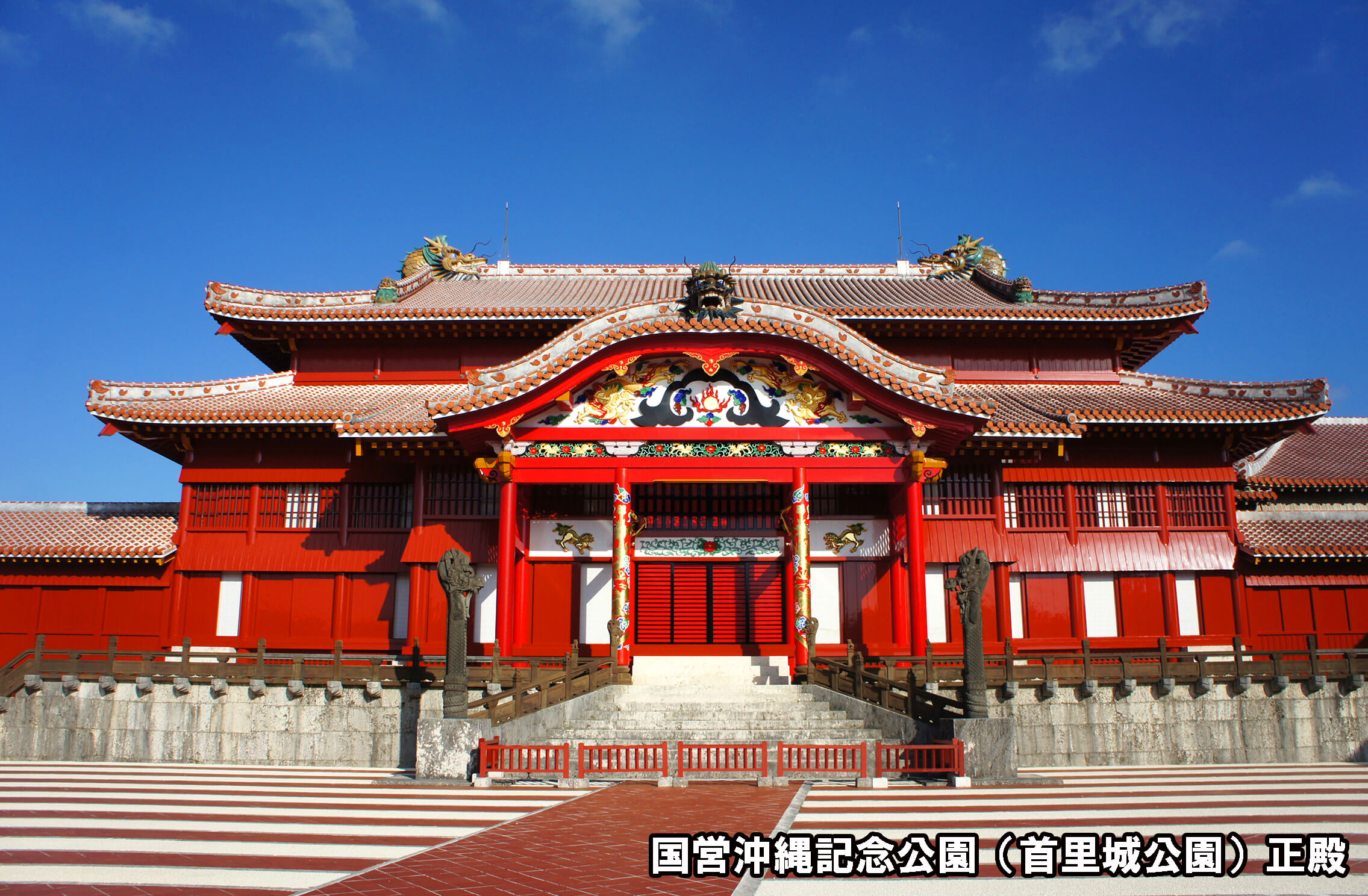 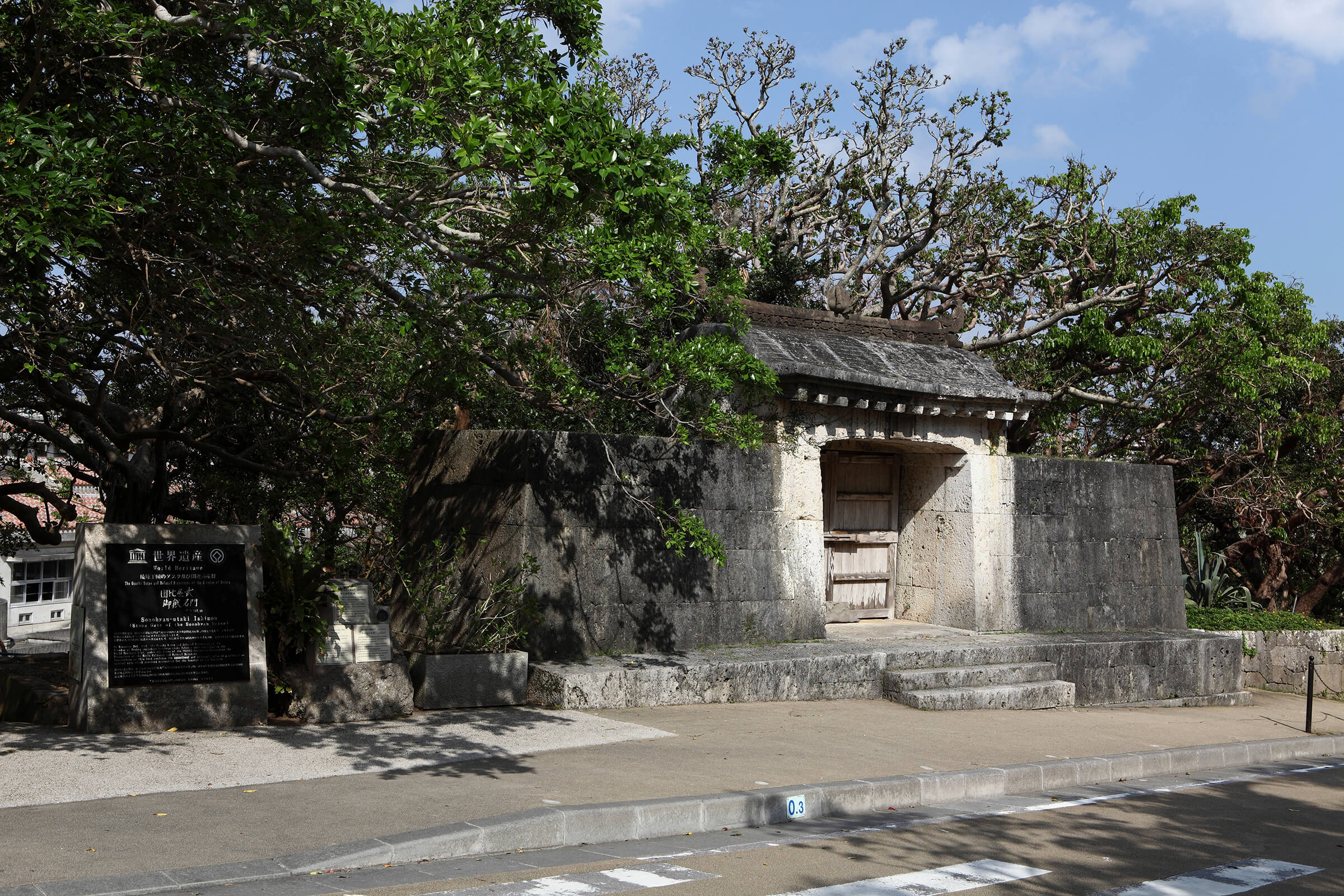 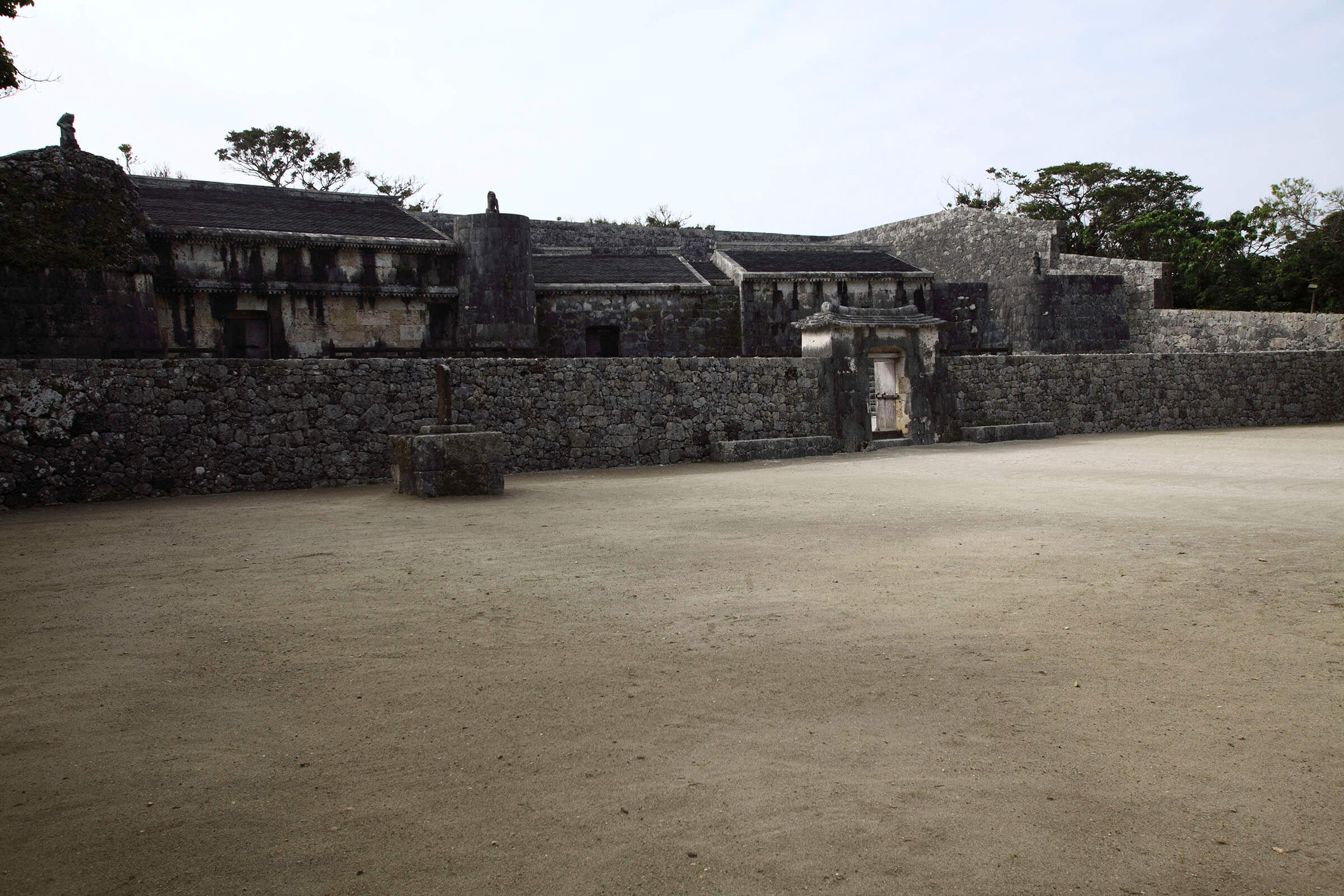 It is the mausoleum where the 2nd Sho Dynasty is entombed, built by King Sho Shin, the 3rd Sho Dynasty (reigned 1477-1526). It is a valuable example of a unique stone-built memorial monument of Ryukyu region in early modern Japan. 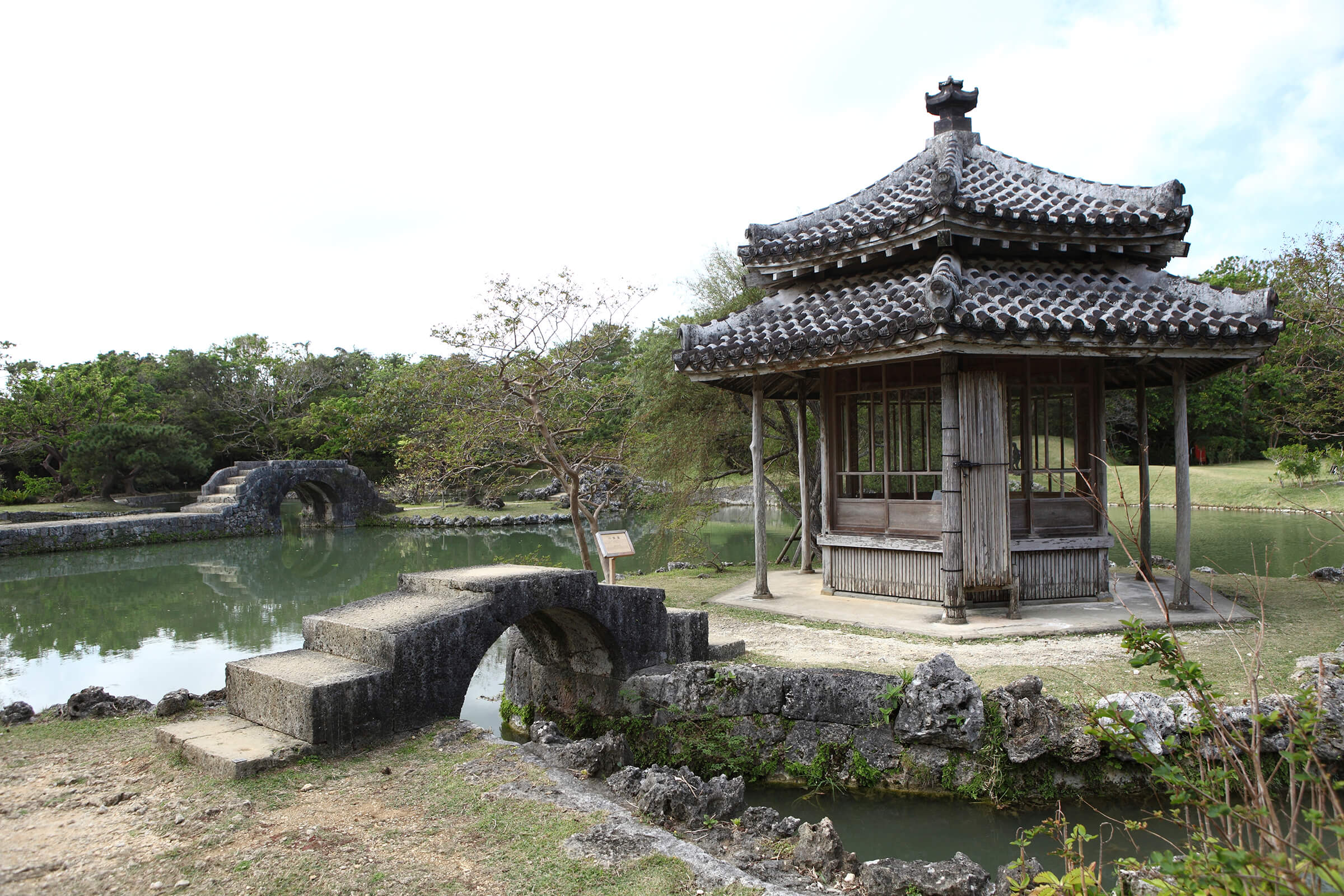 It is the second residence of the royal families, and a garden featured Ryukyu style design, established in 1799. It was used not only as a retreat for the royal family, but also as a place to entertain the diplomats sent by the Chinese emperor, and played an important role in the foreign affairs of the Ryukyu Kingdom. 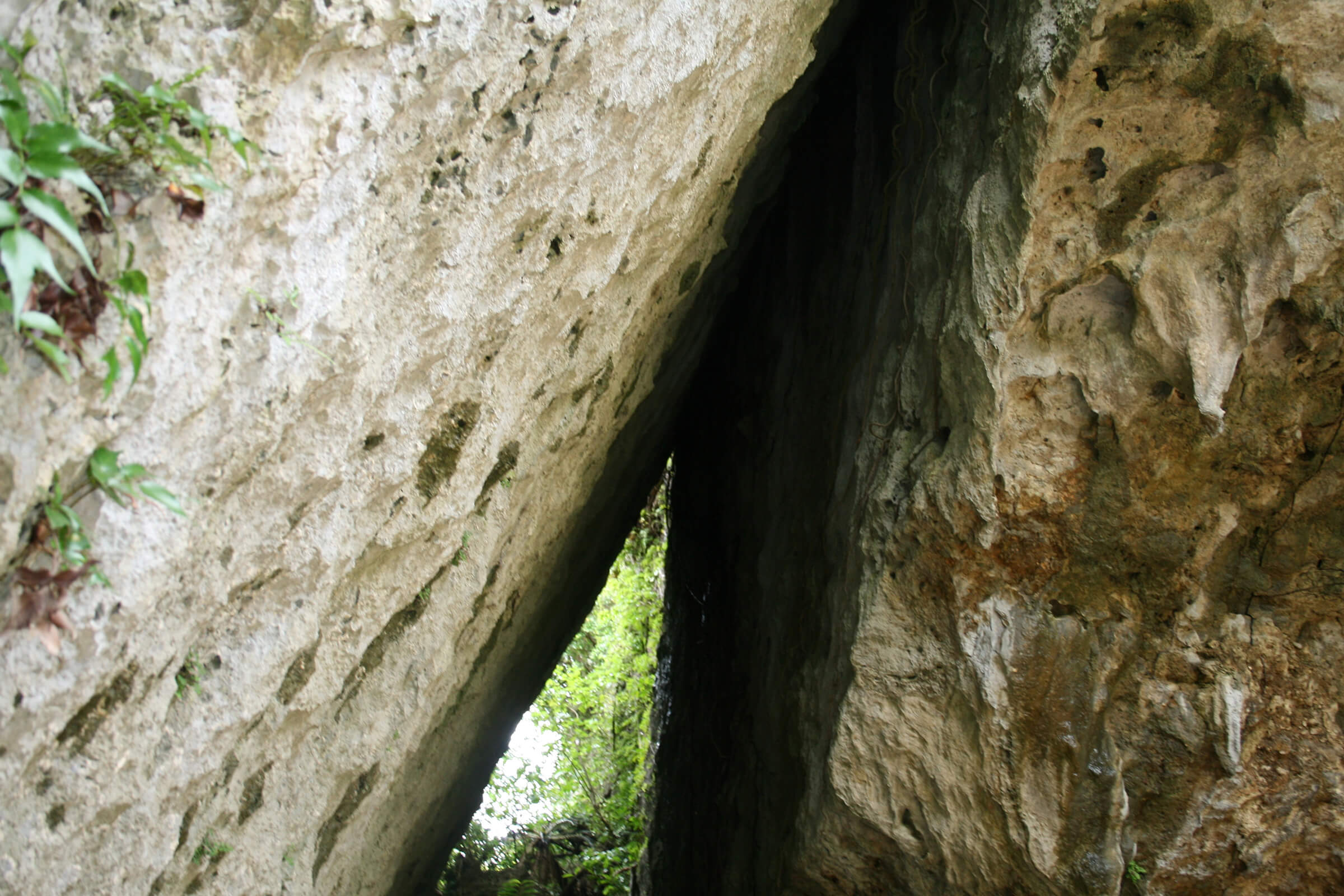 Utaki is the name for traditional holy places in the Ryukyu Islands and Sefa-utaki is the most sacred of them all. The King Sho Shin, the 3rd Sho Dynasty (reigned 1477-1526) maintained the place as a national ritual place to support the royal power from both the religious and spiritual sides. Furthermore, Sēfa-utaki is a primitive and prominent example of the unique form and view of worship for nature in the Ryukyu region.

* Please remember that, utaki is a place of worship of nature, and a part of the people’s life and ritual. Please follow the signs, and stay on the paths. In addition, please do not move stones and rocks, nor take them home. Your appropriate behavior is greatly appreciated.